In 1994, for reasons unknown to me, there was a court-arranged paternity test. The test was to determine whether a 20-year-old female was the daughter of a 48-year-old man. The test was done by Roche Labs. The man and the mother of the female had never been married, but the man had believed that he was the father, and he had served in that role. The female called him “dad,” and they had a father/daughter relationship.

Fast forward 26 years, to 2020. The daughter of that then-20-year-old took an autosomal DNA test, to see what she could see. Likely, as most folks new to the world of autosomal DNA, when her results came in, she did not understand what she was seeing. However, one of her DNA matches saw that the woman absolutely had to be a HUFFORD descendant, and that the two had to be closely related.  And that woman (whom we’ll call “Ann”) sent me an email message late evening on Monday, April 13:

“I’m seeing a close HUFFORD relative. Who is it?”

When Ann compared the DNA, here’s what she saw: 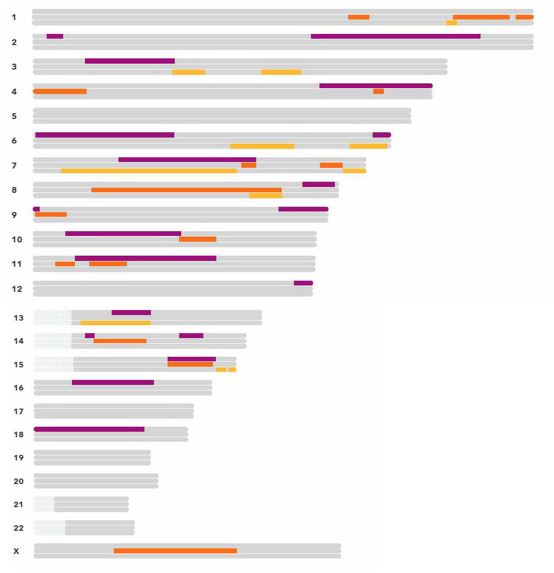 And then there was this, showing the exact segment match between ????? and Cousin 2, from point to point, on the X chromosome:

I told Ann to go to sleep, and I’d see what I could come up with. The next morning (Tuesday), there was an email from Cousin 1:
“I just wanted to share this with you. It just popped up on my 23andMe.”

It was a screen shot showing his newest match, the unknown female ?????. I said, “I’m already on it. Ann drew my attention to it last night.”

By late Tuesday night, I knew where the unknown female fit: Her mother was that 20-year-old who, back in 1994, was told by Roche Labs that her father was not her father. Surprise! The lab screwed up, badly.

Wednesday, I phoned the Hufford cousin who was given incorrect information in 1994. At the time, I knew nothing about the 1994 paternity test. As with so many, these were all folks who had come into my life only because of my genealogical research, and I did not know his life story. I told him that he has a 22-year-old granddaughter. As I explained, this 74-year-old man said, “No. There was a paternity test in 1994, and it said that I’m not the father of this young woman’s mother.”

The pain and shock in the man’s voice cannot be described. As we spoke, I could hear him walk in his home to where he could find a file with that old paper from 1994, and he read from it: “You are excluded as a possible father.” For 26 years, he had saved a piece of paper saying that his daughter was not his daughter. And now some 4th cousin twice-removed whom he has never met was telling him, “She’s your daughter. That test was wrong. I don’t know how the lab got it wrong, but she’s your daughter.”

And there were his anguished words again: “Oh, no! Oh, no!” Twenty-six years of a father-daughter relationship taken because of a lab error. 😦